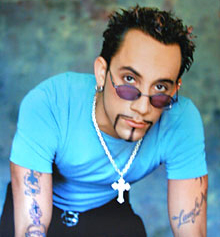 Ideal Girl: AJ likes their eyes. The first thing he looks at is your eyes. He also likes long hair.

AJ appeared in 27 plays by sixth grade, a talented dancer, actor, and singer! He still hasn't gotten his driver's liscense because he is too busy touring with the group.

Though AJ is the biggest Worry Wart in the group, he is a dare-devil at the heart. His parents divorced when he was four. He was just recently reunited with his dad. AJ has a deep raspy voice that Kevin would like to have!