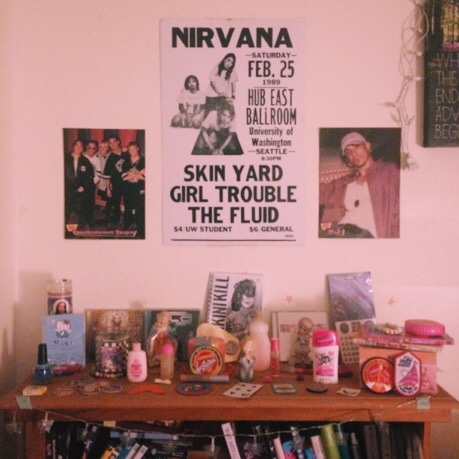 My name is Anna and I have a strange fascination with the 90s and early internet culture.

Despite being born in 1997, I have always somewhat missed the 90s stuff I was so briefly exposed to in my childhood. When you're very young and you're learning about the world, you sort of expect that everything in it will always stay the same. You don't understand that fads and celebrities and music and fashion will inevitably change, and so when I was younger, I thought that bellyshirts (the original name for crop tops), the Backstreet Boys, and my Windows 95 computer would always be there as I grew up.

Now almost 20 years old, I am totally obsessed with the Backstreet Boys, finding deadstock from a 90's Delia's factory is my #1 fantasy, and I have bought an embarrassing amount of crazy stuff on eBay.

The kinds of things I collect: Backstreet Boys memorabilia and merch, VHS's (I still have my old TV in my room with a built-in VHS player), PS1 games, Sweet Valley High books, POGS, old perfume, as much Teen Spirit deodorant as I can hoard, vintage Girl Scout patches (80s-90s), and 90s CDs.

I also have a full shrine in my room full of all of this stuff, which started as just a shrine to teenage girls and femininity (originally based off of the bedroom from The Virgin Suicides), but has expanded to include 90s stuff and sometimes older vintage stuff, like my Love's Baby Soft perfume and a few Girl Scout patches from the mid to late 80s. (see shrine above)

Beavis and Butthead Do America VHS

A Goofy Movie and Space Jam on VHS

Backstreet Boys: Around The World Board Game (2000)